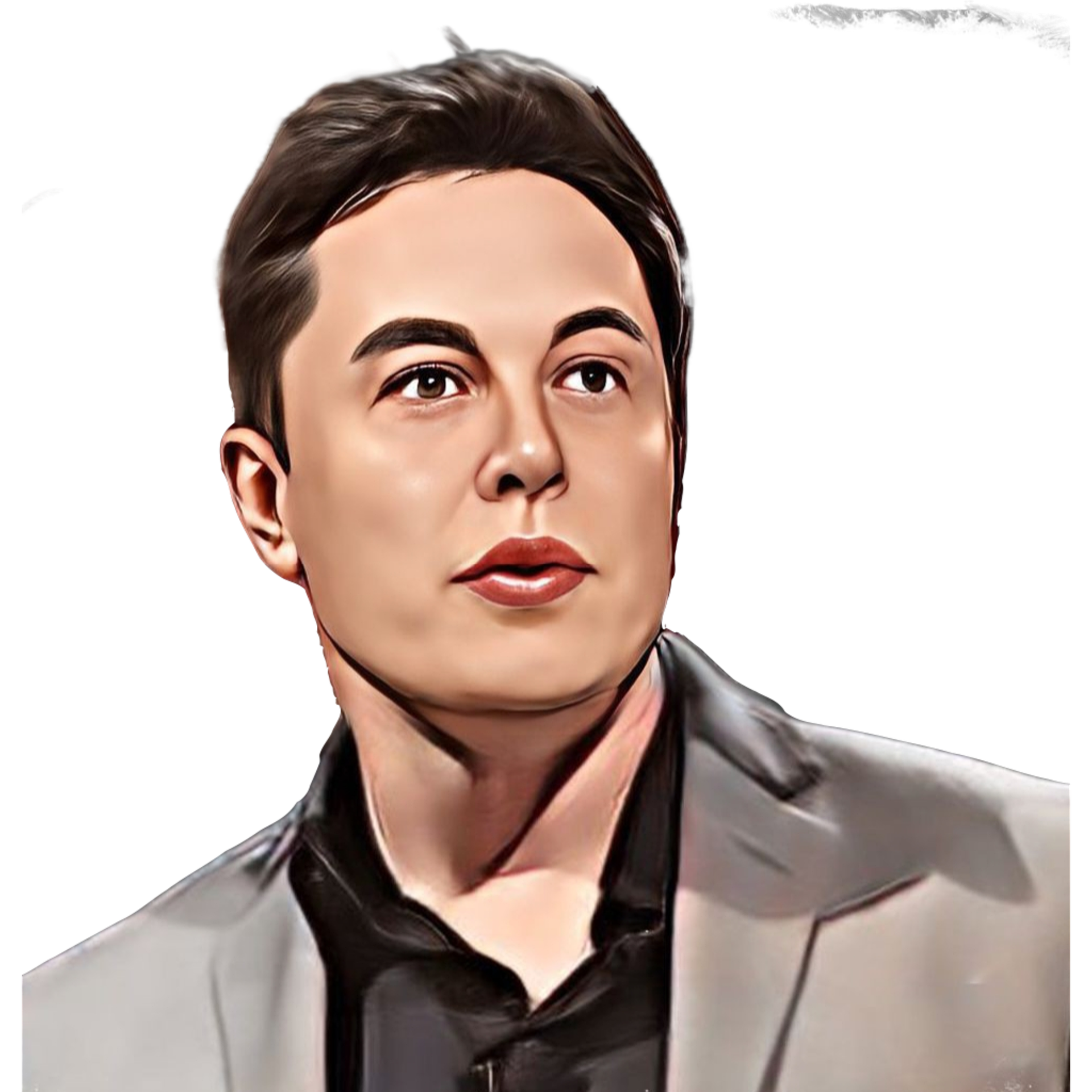 The wealthiest man in the world, indeed, there are many things that, as entrepreneurs, we can learn from him.

With big companies at his mercy like Tesla, worth $773 billion, or Space X, worth $74 billion, we can safely say that the South African billionaire knows how to move his finances and manage his business. This is not the only impressive thing about him, since although it is controversial, it has been announced that he could also be the owner of the social network Twitter in the future.

This billionaire almost seeks to transform our way of life, undertaking tasks such as connecting our minds to computers with his Neuralink project or even taking the man to Mars. Controversial and successful, there are several lessons we can learn from Mr. Musk in terms of business, and today at Codedesign, we share 10 for you to apply in your company.

So grab a pen and paper, and let's see what we can learn from Mr. Musk.

Tesla is nowadays a symbol of success for the automotive industry, but would you believe us if we told you that Tesla Motors was originally a failed project?

The electric vehicle industry has had a history since the 19th century, but regardless of this, any company achieved build an entire industry, that is, until Elon embraced the risk.

Companies like Ford or GM brought out electric vehicles at some point, but these products were limited, and they didn't continue producing.

Meanwhile, Elon Musk saw an opportunity in a market without competition, and also this project came with the idea of bringing less harmful vehicles to the environment.

Therefore we can conclude that taking risks is necessary even if you can fail and that if these risks go hand in hand with an ideology you faithfully believe, you'll have the courage to carry your project forward at all costs.


If something’s important enough, you should try. Even if – the probable outcome is a failure.” — Elon Musk

Before Tesla and Space X, Elon Musk was in charge of building himself as a brand, so beyond companies, we know and draw more attention to the person behind them.

What is the positive of this? That you as an entrepreneur show your value as a business person and will make people associate any new business with your work quality and ethics.

Elon Musk is in charge of transmitting his values to his companies, so he only seeks to work with the best of the best, and in the event of any minimal error, dismissal is guaranteed.

By becoming your brand, you'll spread your ethics and values to your team so that everything goes in one direction.

Focus on what matters: Product Quality

Some people lose a lot of their potential by dividing themselves into many different tasks, which means that in the end, the person has done more things but of mediocre quality.

Elon Musk has been able to get his alabaster (the stone used by sculptors) to focus all his work on single pieces that can be sold for their high quality, beyond all the marketing that is spent.

In other words, for Elon Musk, it is preferable to dedicate all his effort to bringing a product of the highest quality before spending too much on marketing campaigns or other paraphernalia.

Elon Musk understands that the mindset of consumers goes beyond marketing. They'll consume more based on quality and user experience than anything else. In his own words:

As we have said in countless articles, interacting with users through social networks is essential to humanize your brand and build good relationships with them.

This is essential because when you have a close bond with your audience, they see your company as someone trustworthy, a friend who they can attend to and who will answer their questions.

In this way, Elon demonstrates his commitment to his users in a Tweet the day after Christmas, where he thanked his Tesla customers and asked them what he could improve in their company. 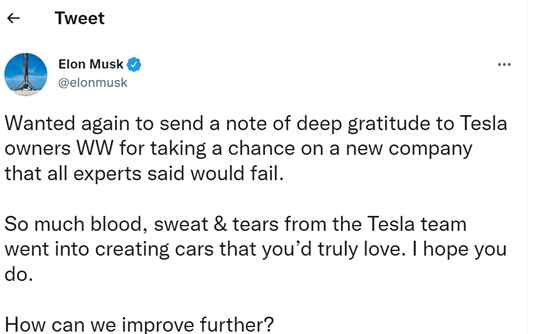 As expected, the answers were not long in coming. Thus the Tweet reached 137,000 likes, and Elon responded individually to each one of the comments giving information about the technology and any news that would arrive for the company. With such a noble feat, users were impressed by Elon's commitment. In a "CNBC Make It" article, we got this statement from a Tesla user: 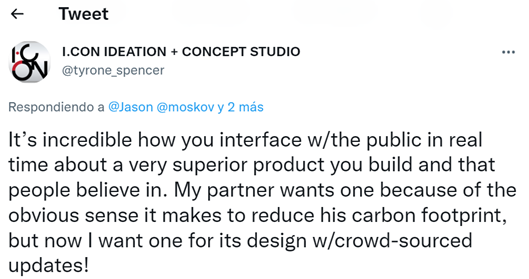 Don't worry about the competition.

Sometimes in our quest to achieve our most significant potential, we lose sight of our ultimate goal and focus on outperforming our competitors.

Elon Musk doesn't think this way about Tesla, for example. Unlike worrying about the competition, he would be happy for these competitors to come along as it would lead the auto industry to a healthier environment for the planet.

Competition is an essential part of any business, and there is nothing we can do about it. Instead, it is more beneficial for you to focus on your goals. Compete with your previous version to continue growing within your business!


“A well-thought-out critique of whatever you’re doing is as valuable as gold.”

Confidence in ourselves is essential to maintain our impetus as entrepreneurs, but we cannot let ourselves be blinded by our ego; it is wise to accept that there are things we can improve.

Elon himself urged business leaders in December 2021 to carefully seek criticism of their products since, according to him, this is key to the success of your business.

Be strong, patient and constant.

See, life is not easy, but it's worth it. The same way goes for having a company.

When you start your own business, you'll have some tough times to face, the way to the top is hard to transit, but once you get there, you'll feel rewarded. However, on your way, you'll find some difficult times, and while you are there, the best solution isn't to stop and give no. You have to breathe, stand up and keep fighting until the end.

In Elon's case, the business hasn't been accessible, and his history proves it. In 2008 Tesla was a few days from bankruptcy, and the first three launches of Space X were a failure. In his most challenging times, he even got divorced, but no matter the loss, staying strong, being patient and constant is what matters.


"A lot of times, people think creating companies is going to be fun. I would say it's not. It's really not that fun. I mean, there are periods of fun. And there are periods where it's just awful. And particularly if you're CEO of the company. You actually have a distillation of all the worst problems in a company." - Elon Musk

According to Musk, the first principles of thinking requires you to start from the most fundamental truths and then build up from there. For example, when he explained why he began building rockets, he said that his main goal was to explore beyond earth. Nevertheless, these were too expensive, so he made them from scratch.

When you try to build your company, don't reason by analogy, it means don't look at an existing product and make it slightly better. Instead, try to answer these questions with your business to find a better way:

Focus on how you can solve the audience's problems, not their money...

Although we are talking about the most millionaire man in the world to date, it will impress you to know that the ideal of this billionaire is not money but rather to solve the most significant number of problems for his audience.

Let's think about it like this, when you try too hard to get something, sometimes you don't get it; you even seem to repel it.

You are after your clients' money so desperately, ultimately driving them away because no one likes a desperate person.

Instead, what you should be looking for is to understand your audience's needs and look for the most effective ways to solve their problems. Thus, you become more of an ally of your buyers than just a company.

In the final years of Paypal, the digital bank received eBay's $ 1.5 billion buyout offer. Although all the executives agreed to do it, Elon refused. For Elon, Paypal had the potential to solve many problems that he saw in the financial system, so he valued its potential more than the millions of dollars offered to him.

Most companies would decide to accept this deal since more money is what they are looking for. Nevertheless, this modality avoids the competition principle: A problem you can't or won't solve is a chink in your metaphorical armour.

So, when you find a business willing to solve this problem, they will have more possibility to overcome their competitors.

For example, the cost and capacity of electric car batteries stopped many manufacturers from producing affordable models, causing them to abandon this business because gas and diesel cars were still booming.

Meanwhile, Tesla decided to solve the battery problems despite the cost and today, and it's worth more than the five following biggest auto manufacturers.

For this reason, Elon has been a person who is passionate about learning as much about the topics to which he is dedicated, having contact with teams surrounding his companies.

When Elon was asked how he knew so much about Aeronautics without a degree, the creator of Space X answered most simply: "I used to read a lot."

Elon believes that with all our tools at our disposal today, we can all be our masters in any area, including rocketry and aeronautics.

We must have the passion and curiosity to soak up everything to have knowledge that allows us to judge what is a good job and what is mediocre.

Knowing the habits and lessons of our idols makes us feel closer to them, while on the other hand, it inspires us to become a better version of ourselves.

When we understand where their success comes from and see that they are earthly things. Still, they come from hard work and admirable discipline, and we can set new goals with valuable knowledge to achieve them more effectively.

At Codedesign, we seek to help and inspire our readers to take their inner entrepreneurs forward. If you need help or advice with your business in the online field, contact us and let us be your guides on this exciting journey!

Until a new article, see you!

Feel free to contact us to see the unprecedented growth of your business.

Will AI replace Digital Marketers? How Technology is changing the future of this industry?